Find out what’s new in our company and our brands around the world.

Lomo saltado may be helping Machu Picchu reverse its fortune, from an over-touristed bucket list item to one of the leading South American destinations to sustainably manage its waste.

I had ordered Peru’s beloved stir fry classic, lomo saltado, about eight times before I arrived in the small mountain town of Machu Picchu Pueblo to visit the great Citadel. And my plan was to order it again, even if I might be missing out on discovering other delicious meals in the global gastronomic hotspot that is Peru.

And, it’s not just me. Widely thought to be only second in popularity behind Peru’s beloved ceviche, this is arguably the country’s go-to national dish. After all, lomo saltado hits all the right notes at all the right times – think French fries alongside soy sauce-drenched steak and vegetables – making it hard to order anything else. However, little did I know that this Peruvian icon would be a factor in Machu Picchu’s reversal of fortune, from an over-touristed global bucket-list item to one of the leading destinations in South America to manage its own waste in a sustainable way. 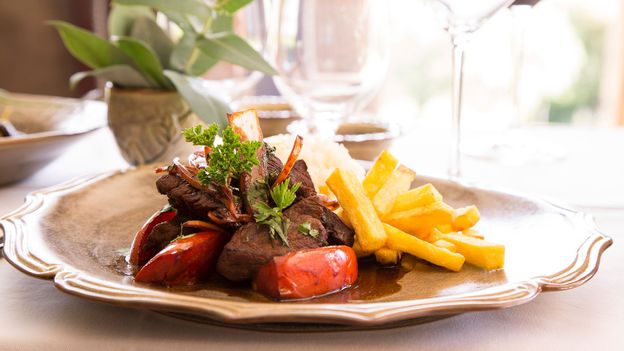 The ancient site of Machu Picchu is located in a cloud forest at the end of a train line. Unless you hike in on the famed Inca Trail, this is the sole way to reach Machu Picchu Pueblo (formerly called Aguas Calientes). The town services more than 1.5 million tourists a year (an average of more than 4,000 a day), who ascend the mountaintop to the Inca ruins. Whatever goes into the city must come out the same way, whether that be people, rubbish, plastic water bottles or the food scraps and oil from their meals.

Whatever goes into the city must come out the same way

I didn’t think of any of this when I ordered my ninth iteration of lomo saltado at Café Inkaterra, an irresistible thatched roof and white stucco restaurant that is the first to come into view upon arrival to town by train. Here, I savoured an impeccable iteration of stir-fried beef strips mixed with soy sauce, ají peppers, quartered onions and tomatoes served with pile of French fries and a side of rice. For those unfamiliar with the quirks of Peruvian cuisine, this may sound like a strange mash-up of New- and Old-World foods with a Chinese twist – and it is.

Lomo saltado is a classic dish of the chifa tradition, the Chinese-influenced cuisine of Peru. Between 1849 and 1874, more than 100,000 Chinese immigrants came to the country as indentured servants to alleviate the labour shortage after the abolition of slavery. Most were from Guangdong – known then as Canton – and they brought their woks, ingredients and cooking methods with them. Many went on to open up businesses, including restaurants serving a fusion cuisine of typical Cantonese dishes made with South American ingredients, such as ají peppers and pineapple.

Lima was the epicentre of this culinary fusion, and still is today, with an estimated 6,000 restaurants serving the cuisine throughout city. As lomo saltado’s longevity and popularity attests, chifa has become as Peruvian as potatoes. 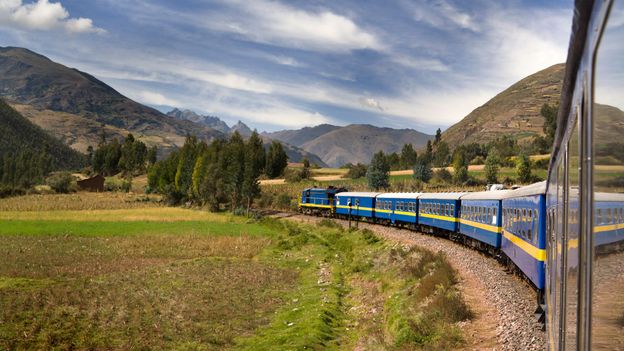 Food scraps and oil need to be transported out of Machu Picchu Pueblo by train (Credit: YinYang/Getty Images)

The dish is arguably the cuisine’s most famous creation, now served not only at chifa establishments but in Peru’s beloved pollerias (chicken restaurants) too. Here you’ll find another hugely popular Peruvian favourite, pollo a la brasa (rotisserie chicken), also served with a side of fried tubers.

In Machu Picchu Pueblo, just short of two years ago, the leftovers from these two dishes and other Peruvian favourites such as causa (a layered potato casserole) and aji de gallina (spicy creamed chicken), would result in a pile of vegetable scraps and a vat of oil that would need to be transported by train back to Cusco or Lima, where it could be dumped or processed. Given the high cost of train transportation for businesses, most restauranteurs simply threw the oil into the Vilcanota River, which runs through town. And restaurants were spending their profits sending potato peelings out of the city.

For years this bothered Marco Antonio Huamán, a Machu Picchu-based biologist who works for the Inkaterra Asociación, the non-profit arm of the Peruvian eco-hospitality group, Inkaterra. The company runs two hotels in the city, so he closely understood the complexities – and urgency – of the problem. First on his mind was the oil pollution, which, as fellow biologist and Inkaterra Asociación Coordinator Carmen Soto explains, is a disaster for a river.

“[Oil pollution] is one of the most serious factors of water pollution,” she said. “It is capable of creating a layer above the water, which is difficult to remove; makes it hard for the oxygen to pass; and can kill living things… One litre of used oil can contaminate up to 1,000 litres of water.” 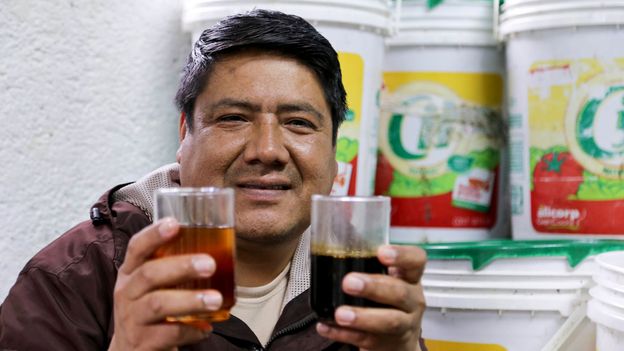 It was also bad for business. Not only were costs high to tackle waste properly for local establishments, but Unesco threatened to place Machu Picchu on its List of World Heritage in Danger in 2016 because of the unsustainable ways in which the site was being run.

“All this made me think that we should do something to help the population and design a biodiesel machine,” said Huamán. His vision came to fruition when the Inkaterra Asociación partnered with AJE Group, a Peruvian beverage multinational company, and the Municipality of Machu Picchu Pueblo. AJE purchased the machinery, Inkaterra Asociación collects and produces the biodiesel, and the city communicates with restaurants, recommending to them to recycle their oil at the plant. Currently, more than 200 restaurants and hotels participate.

Huamán and his team create biodiesel in a small building on the property of the Inkaterra Machu Picchu Pueblo Hotel, a sprawling luxury eco-hotel. The space is stacked with five-gallon oil buckets – the same ones the fresh oil comes in – with which roughly 200 litres is collected each day, depending on the season. The machine itself has a tiny footprint as no large machines or industry are allowed in the protected area. This, together with the vibrant sounds of the cloud forest outside and the rhythmic patter of rain on the roof, makes the biodiesel facility seems more akin to a tropical hut than an industrial plant – albeit one filled with tubes, canisters, reagents, buckets of biodiesel and a biodiesel machine, infusing the space with the spirit of science.

Machu Picchu – and the rest of Peru – remains closed to both local and international travellers, and as of publication, there is no set date for reopening the site. The Ministry of Culture, however, has established that once Machu Picchu reopens, only 675 people will be allowed to enter per day to allow for social distancing adherence.

Where to find lomo saltado

(Note: restaurants may be closed due to Covid; be sure to call ahead)

Indeed, some wizardry was involved. The published methods and recipes for biodiesel took some tweaking to account for the high altitude and permitted ingredients, given this is a protected area.

“It was not easy to start this project,” Huamán said. “The process is different than the limited information out there will tell you. When we first followed guidelines to make biodiesel, we followed the instructions exactly, but we created some other thing… Many days, we were trying to figure out what happened. For example, what temperature is good? When I told my friend we were working with 60 degrees, he said you are crazy, the machine will explode! But it didn’t explode. Clearly, we need to adjust what temperature is used according to each place.”

What Huamán eventually perfected was originally intended to fuel the buses that take the thousands of tourists up to the citadel each day from the town. However, the biodiesel they created could not provide the required power for the mountainous trek, so this idea is a work in progress. For now, it is used to heat the El MaPi Hotel, replacing diesel fuel.

“The largest use of biodiesel today is to blend it with diesel, petrol diesel,” explained Deepak Rajagopal, an expert in industrial ecology and life cycle assessment at UCLA’s Institute of the Environment and Sustainability. “You can mix the two [fuels] together. Biodiesel is very similar to [petroleum] diesel; essentially, it reduces your dependence on fossil diesel. That’s the main benefit. You can also use biodiesel with advanced processing to produce other kinds of industrial products.” 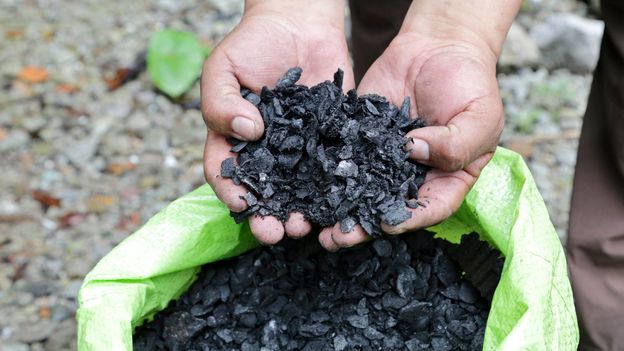 Biochar is used in the reforestation of the Andean cloud forest (Credit: Elisa Parhad)

In Machu Picchu Pueblo, biodiesel’s resulting glycerine is used to wash floors and the city’s pavements. (Technically, it could be used to wash the hotel’s linens, but the alkalinity would eventually ruin the cloth.)

“The benefit of glycerine is that it is biodegradable,” said Huamán. “We will not be contaminating anything using glycerine to clean, unlike other chemical-based products. As a fuel for heating, we are keeping particulate and smoke out of the atmosphere.”

Rajagopal added that this kind of deterrent to chemical pollution is not always top of mind. “Everyone talks about the problems with carbon and pollution. But chemical pollution – in this case, dumping oil into the river and reducing chemicals that otherwise would not be there and using more naturally degradable, vegetable-based soaps – is a big plus.”

And, the five tons of organic matter (including the mounds of potato peels and vegetable scraps from restaurants) that need to be hauled out by train each day? Huamán and his team had the idea to process this waste using pyrolysis at a treatment plant on the outskirts of town, another project using the combined efforts of Inkaterra Asociación, the AJE Group and the Municipality of Machu Picchu Pueblo. The material is subjected to high temperatures in the absence of oxygen to produce bio-coal, sometimes called biochar, a natural soil amendment. 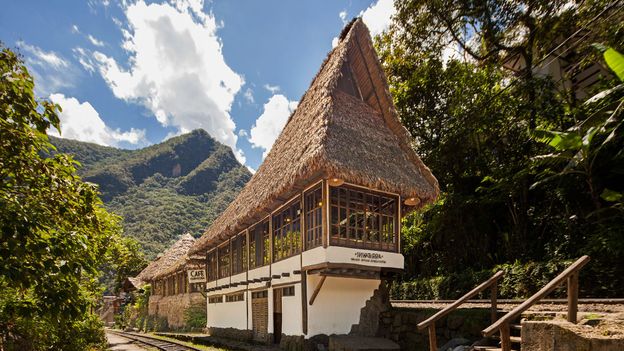 Café Inkaterra is the first restaurant to come into view when arriving at Machu Picchu Pueblo by train (Credit: Inkaterra Hotels)

Huamán dreams of helping other communities make biodiesel throughout Peru, especially in high Andean communities that lack resources to heat their homes in sustainable ways. He explained, “The oil you can get in the cities – how many pollerias are there? All the little villages in Peru have two or three such establishments. They each produce approximately 30 litres of oil per week. When they fry those potatoes, they produce a lot of oil.” Oil that can be used again in a sustainable way to achieve a circular economy, one that eliminates waste and finds ways to continue the life of resources through more than one iteration. For Huamán’s small mountain town with the world at its doorstep, this kind of thinking is a necessity.

As for me, I’ll dream of visiting those high Andean villages Huamán hopes to improve with his high-altitude biodiesel know-how. I’ll do my part to try out their versions of lomo saltado and they’ll heat their homes with the resulting oil. Until then, I’ll be making my own version at home and composting the vegetable scraps. Just as Huamán does.

https://amarumayu.com/ The multinational, owner of brands such as BIG Cola, Oro, Cielo or Free Tea, announces that it will enter Amazon ‘reta...

10 good news stories that lifted our spirits in 2020

2020 has been a challenge, but ther has been plenty of good news to see us through to the new year © Westend61 / Getty Images Let’s be h...

Cultural heritage and the management of its value

Global Director of Communications and Sustainability, AJE Grou According to the UNESCO, there are a total of 1,007 properties declared World Herita...

Thank you for leaving your details!